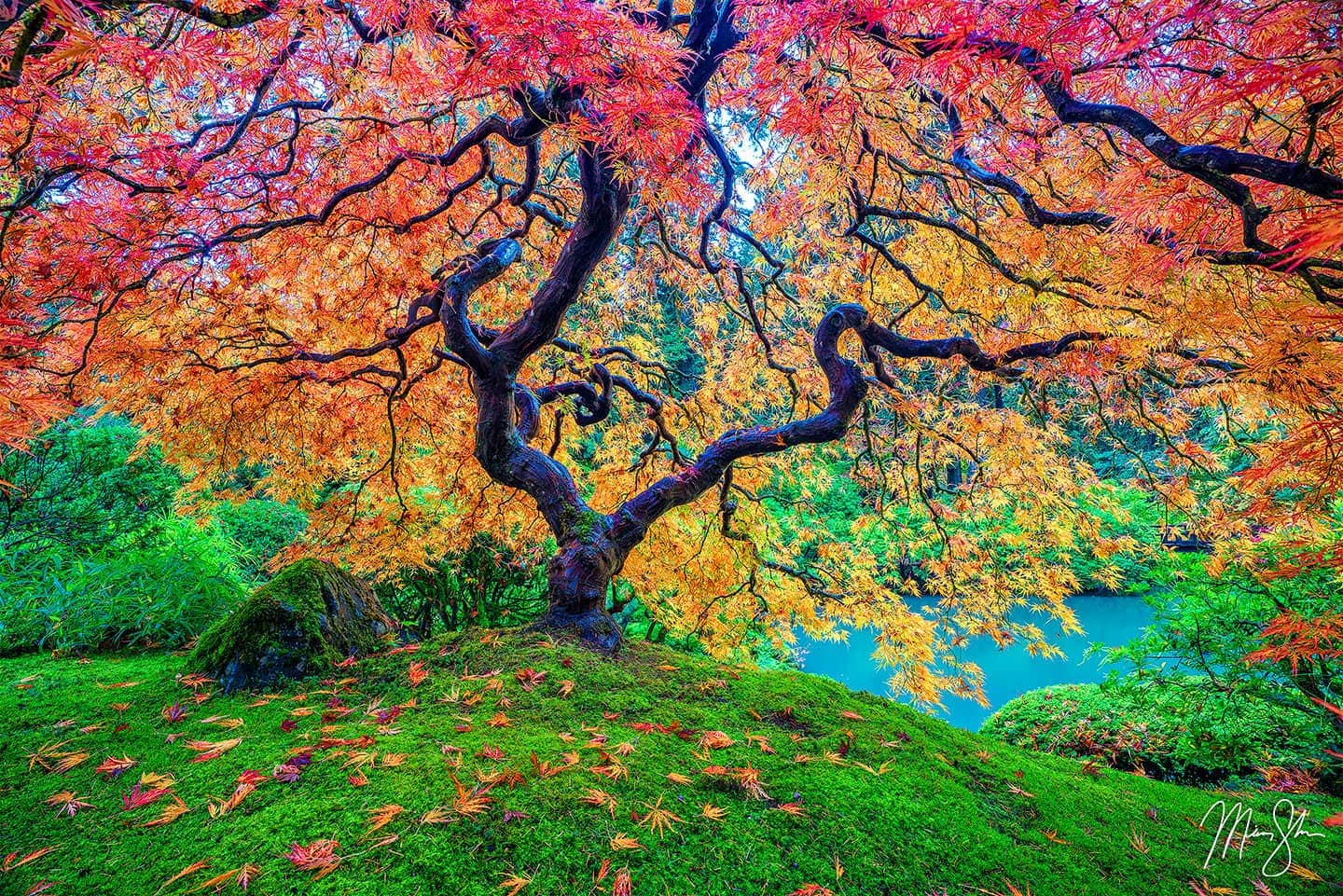 Where is the famous National Geographic Tree? The Portland Japanese Garden!

Who is Peter Lik? And what is his “Tree of Life” fine art print?

If you’re a nature photographer that follows other photographers, it’s likely you’ve come across Peter Lik’s work before. Originally from Australia, he moved to the United States and has opened many successful photography galleries in a number of high-end locations such as Aspen, Soho, Las Vegas and Maui. Arguably, it was Peter Lik and his “Tree of Life” fine art print that made the Portland Japanese Garden maple tree photograph famous. I’m sure other photographers shot similar images before Peter Lik, but his marketing power and celebrity status certainly helped give rise to “the tree” as we know it. Like I said before, I know when I saw Peter Lik’s “Tree of Life” fine art print for sale at his gallery, it was the first image of the famous tree that grabbed my attention.

I’m an admirer of both the marketing genius and style of Peter Lik. Lik Fine Art has more a dozen galleries located in Aspen, Soho, La Jolla, Key West, Dallas, Chicago, Madison Avenue in New York, Washington DC, Lahaina and Waikiki in Hawaii along with four in Las Vegas including the famous Caesers, Venetian, Mandalay and the Forum. It was his Aspen, Colorado gallery that I first visited more than a decade ago. There was a lot of press back in 2015 when Peter Lik sold the world’s most expensive photograph titled “The Phantom.” Some of it was good and some was bad. The Phantom is a beautiful shot of a light beam in Antelope Canyon. If someone loves a photo enough to purchase it for $6.5 million, then more power to that art collector and the artist who created the piece of fine art that sold for that much. If you’ve ever walked into one of the Lik galleries, you were likely blown away by the presentation and beauty of many of the images. What he has on display is nothing short of breath-taking, and the way he presents his galleries just screams luxury in the fine art market. Some of his most famous work include Tree of Life, Phantom, Ghost, One, Eternal Beauty, Moonlit Dreams, Enchanted Morning, Ocean Window, Le Reve and two of my favorites from the airplane series called Sky Titan and First Flight.

Q. Where is the famous National Geographic tree?A: The Portland Japanese Garden! This beautiful tree was planted in 1968 and has grown to be one of the most photographed trees in the world.

The thing is, while Peter Lik may be the most famous photographer to grace the famous Portland Japanese Garden’s famed maple tree, there have been many others who have also made a name for themselves as photographers of this tree. I reached out to the Portland Japanese Garden and was told they get a lot of questions asking, “Where is the National Geographic tree?” Portland native, Fred An, won the National Geographic Traveler Photo Contest back in 2012, which also brought in an influx of people trying to find the tree. The truth is, the tree is actually only around 8 feet tall, and unless you know what you’re looking for you will completely miss the classic Peter Lik composition that makes up his “Tree of Life” photograph.

When I reached out to the Garden for more information about the tree, they kindly gave me a lot of wonderful details about the history of the tree and even shared the amazing photo above that was taken in 1968. That was the same year that the tree was planted in the Upper Pond area of the Strolling Pond Garden. This photo was taken shortly after the plantings were finished, and it was estimated the tree was around 20 years old when planted. This would put the tree at about 70 years old today. It’s unknown specifically where the tree came from, but all of the laceleaf maples planted around that time came from residences in the Portland area. It’s also estimated that the tree became famous in the late 1990s or 2000s, but it’s unknown for sure who took that signature shot looking up into the foliage from under it’s branches.

History of the Portland Japanese Garden

I also wanted to take a brief look at the history of the garden. The Portland Japanese Garden was officially opened in 1967, but it took a number of years to get the garden to a place where it could be opened. According to the Portland Japanese Garden’s history page, the Garden was created both to give the citizens of Portland a place of serene beauty while also healing the relationship with Japan after the effects of World War II. It was built in Washington Park at the site of the old Portland zoo.

You can read more about the history of the Portland Japanese Garden on their history page. Today, the garden is widely considered the most beautiful and famous Japanese garden outside of Japan. It draws thousands upon thousands of visitors a year for it’s beauty

Undoubtedly, this famous tree makes for stunning fine art prints! I have four shots of it in my forest collection, all with the beauty of fall colors on display! I print on amazing materials such as Lumachrome HD acrylic prints with hand-made Italian ROMA Tabacchino frames that set my fine art prints apart from the rest. Any of the images from the Portland Japanese Garden would make a statement piece for your home or office. If you are interested in purchasing one of my own limited edition fine art prints from the Portland Japanese Garden, I have released two photos of the tree this year: Thunderbird and Dragonfly, along with a number of other photographs, including the The Koi Dance, Bridge to Beauty and others! As I mentioned before, I offer my prints in a number of formats, including Chromaluxe Metal prints and Lumachrome HD acrylic prints, which can be purchased with an optional Italian hand-made ROMA Tabacchino frame. I may not come from Portland or even the Pacific Northwest, but one thing is for certain. I will be returning very regularly to enjoy the beauty and serenity of the Portland Japanese Garden!