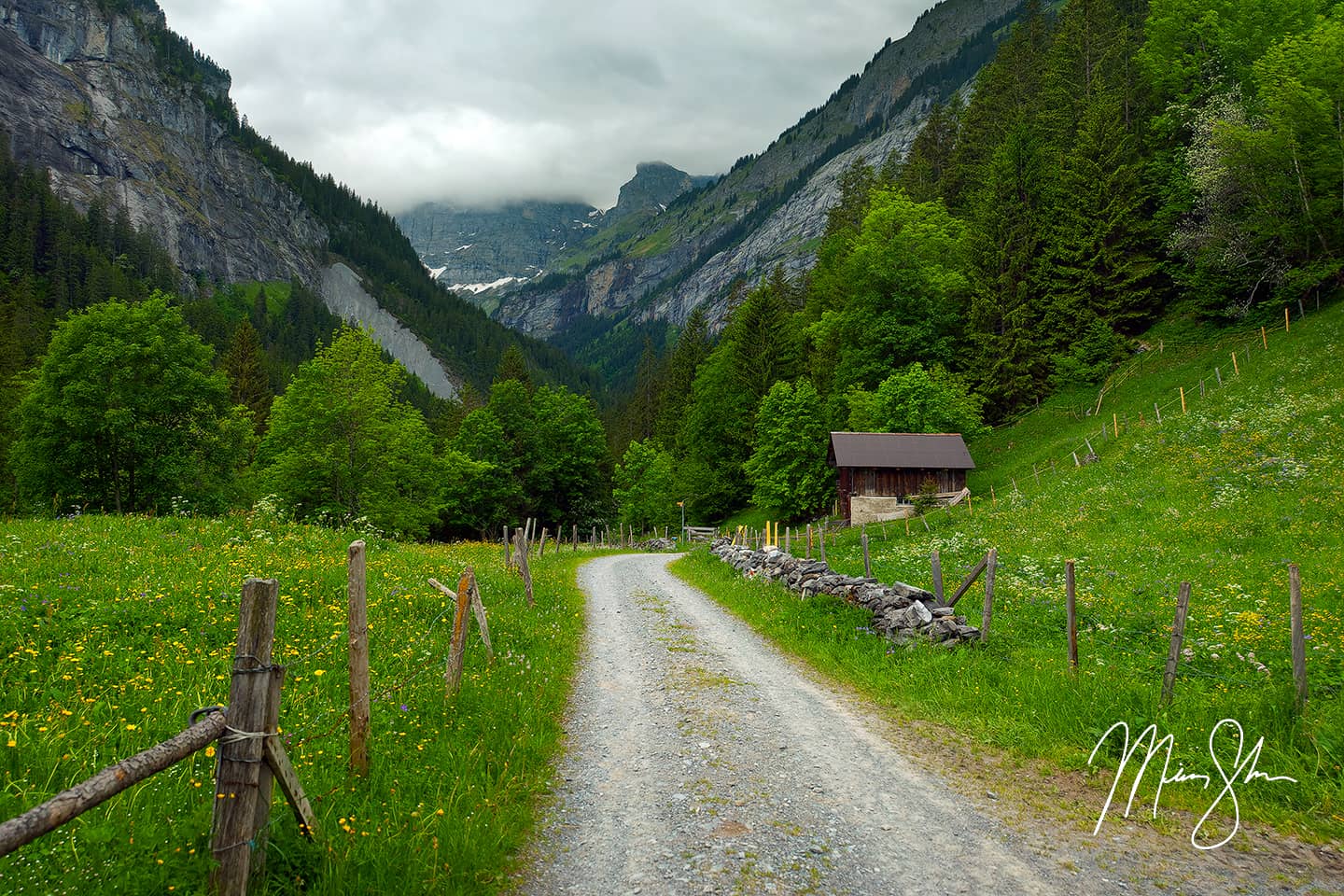 In the last post for Alpine Magic, we visited the Chateau de Chillon. We knew we needed to be to our next location, Lauterbrunnen, by late afternoon. The reason? The Champion’s League final between Manchested United and Barcelona was being played, and we needed to find a place to watch it! We really wanted to take the Golden Pass scenic train, but timing didn’t allow it, so we boarded the train back to Martigny, and eventually to Interlaken, where the train would take us up into the Berner Oberland and Lauterbrunnen! I still remember seeing the first of many famous waterfall’s in the Lauterbrunnental Valley on the train and being in awe. I will say up front, while the rest of my Switzerland and France trip was fantastic, this area was, hands down, the best. Lauterbrunnen, Wengen, Murren and Gimmelwald are a mountain-lovers paradise. All of it is amazing. From the culture and way of life to the scenery and the hiking, it’s hard to find a place anywhere in the world that compares! I’ve been dreaming of the day I can visit Lauterbrunnen, Murren, Gimmelwald and Wengen again! It’s the most beautiful scenery I’ve ever seen in my life!

When we got off the train, we grabbed an easy dinner of cheese, bread and fruit at the bakery and dairy shops. The bakery, dairy, butcher, COOP and train station were all just a few short steps to the place we were staying, at the Valley Hostel of Lauterbrunnen. I normally don’t stay in hostels while traveling. This is mainly because I’m lugging expensive camera equipment and honestly, I just like my privacy. I like to work on photos in peace in my downtime. Thankfully, as we were there in the off-season, there were a number of private rooms available for a really good price. It didn’t come with breakfast or anything like many hotels do, but I was more interested in getting breakfast at the local bakeries by this point anyways. When many people think of hostels, they think of a dormitory style room with a bunch of beds stuck together. While they did have shared rooms, the upper floor had private rooms, of which I had one with a small balcony overlooking Staubbach Falls. The view was amazing, and the price was perfect!

We inquired from the Valley Hostel owners where we could watch the Champions League as the rooms didn’t have a TV. They suggested going down to the Horner Pub, as they would have the game on. So we walked down the main street, and entered the pub. We took the only open table left in the place, and listened to the elderly Scottish and English gentlemen talk about how great the game would be. We were ready to watch Cristiano Ronaldo and Manchester United take on Leo Messi and Barcelona, live from Rome for the coveted Champion’s League final! The only problem? We didn’t see a TV in the place. When a waitress finally came around, we asked about the game, to be told that they were showing it in a room in the back of the pub. “Bloody ‘ell, lads, we better get back there before we miss the kickoff!” I’ve never seen a group of elderly guys move so fast in my life. The English, Scottish, and, well, most of Europe live for their football. I felt right at home! The only thing that could have made it better was if my beloved Arsenal had made it into the final. But to just watch a Champion’s League final with a lot of British and Scottish folks in a place as beautiful as Lauterbrunnen was an experience! We filtered in to a few of the last seats in the back of the big room right in time to hear that famous Champion’s League anthem.

In many Swiss restaurants, ordering a beer is cheaper than water or a coke. That would be great, if I drank beer. However, I don’t. So I ordered a $4 bottle of Coke, and sat back to enjoy the experience. When I tried to tip the waitress/bartender for my Coke, she proceeded to explain to me how American culture tips more than Swiss culture, and I was giving her too much money. The honesty was nice! Another interesting thing I remember about the game was that most non-British tourists in the place were die-hard United fans. But almost all the British and Scottish fans were rooting for Barcelona. I suspect it wasn’t so much that they wanted Barca to win, but rather, United to lose. Many of them probably were fans of their local teams in England and Scotland, and so by principle couldn’t support the red half of Manchester. In the end, Barcelona won rather convincingly by 2-0.

As we left, we followed the older Scottish and English gentlemen towards the hostel as they bantered back and forth about Carlos Tevez, Cristiano Ronaldo, the vision of Xavi and other players and moments of the game. I crashed pretty quickly that evening, excited for the hike through Murren and Gimmelwald that was planned for the morning!

We awoke the next morning ready to visit Murren and Gimmelwald! When I was first researching where I wanted to go in Europe, the entire Lauterbrunnental Valley kept coming up. A friend’s parents lent me some Switzerland travel guides and DVDs where I had first read about Gimmelwald. I researched the area, and knew I had to visit myself. So we grabbed breakfast at the local Lauterbrunnen bakery. Like Fuchs in Zermatt, Lauterbrunnen’s bakery was amazing! With breakfast in hand, we were ready to hike Murren and Gimmelwald.

There are three ways up to Murren and Gimmelwald, which sit perched atop the massive cliffs on the west side of the Lauterbrunnental valleys. One is to ride the bus from Lauterbrunnen to Stechelberg and then taking the cable car up from there to Murren. The second option is to take the funicular from Lauterbrunnen up the Grutschalp, and then board a scenic train that follows the top of the cliff to Murren. The third option is to hike one of the trails up from the valley floor, up and around the cliffs to Murren or Gimmelwald. We decided to take the second option, riding the funicular right down the street from the bakery, and then taking the beautiful train ride to Murren. We would then hike down from Murren to Gimmelwald, then down to Stechelberg and back to Lauterbrunnen. When we arrived in Murren, we saw a Swiss mountain town at it’s finest. Murren sits at almost 5,500 feet above sea level, whereas Gimmelwald is at almost 4,500 feet. We walked through Murren and it’s many hotels. It’s said that there’s 4 times as many hotel beds in Murren as their are permanent residents in the village. It’s a beautiful village, with an amazing view across the Lauterbrunnental valley and the Eiger, Monch and Jungfrau trio of famous Alps in the distance.

We walked through town, admiring the views at every turn. Eventually, we got to the edge of town, where various farms take over the scenery from the hotels of Murren. We eventually came to the outskirts of Gimmelwald, where it’s said the cows far outnumber the people!

Gimmelwald has been made famous by Rick Steves and his Europe books and videos. It’s a beautiful town, with tourism and farming the main gigs for permanent residents. It didn’t take long to move from one side of the town to the other, as beautiful as it was. We had already dropped a good 1,000 feet since Murren, and would be hiking down around the cliffs to Stechelberg another almost 1,500 feet below. We began the hike, which continued with it’s beautiful views of the valley below, but eventually turned back to the west and became more forested. Views like the one below dominated the landscape.

As we walked deeper into the forests and started turning back towards the east, lots of small hidden waterfalls came into view. The entire Lauterbrunnen valley is sometimes referred to as the “Land of 72 waterfalls”. Beautiful waterfalls pour off the cliffs everywhere, and this stretch of the hike between Gimmelwald and Stechelberg contained a good number of them! The waterfall below might be my favorite from that hike because of the way the sun was directly overhead, hitting the water just right!

When we got to Stechelberg, it had gotten quite warm outside, and we were getting really hungry. We decided the evening would be spent walking the valley floor between Lauterbrunnen and Stechelberg, so instead of walking back to Lauterbrunnen, we hopped on the bus that took us back. We stopped into the bakery, dairy store and COOP to pick up food for lunch and snacks for the next few days. Many of the little stores in Lauterbrunnen were fun to visit. I bought more chocolate than I should have, and enjoyed a LOT of cheese while I was there. At one point, I read that some people in Switzerland can tell you what region the cheese came from by it’s taste. We scarfed down a quick lunch then took a much needed powernap.

I awoke after a short while and worked on some of the photos I had taken in the morning. By late afternoon, I decided ventured out into the Lauterbrunnen valley on my own. This easy hike through the valley is one of those memories I remember vividly. The weather was as perfect as it could be, and I started my walk down Lauterbrunnen’s main street towards the church.

Passing by the church, I stopped in the Lauterbrunnen cemetery and shot the photo below. Vivid flowers adorned the perfectly manicured grave-sites.

I continued walking down the road that went to Stechelberg. Towards the edge of town was Lauterbrunnen’s Camping Jungfrau which is highly rated for it’s facilities. A little further along, a stream that came from Staubbach Falls crossed under the road. Right next to the stream was a driveway leading to the house in the photo below. If there was ever a house that I could call my dream house, this is it. Having a beautiful cascading mountain stream run right by your house, and a famous, 1,000 foot waterfall in your backyard for scenery would be a dream come true!

I continued on through the valley, and realized just how many flowers were starting their spring bloom. There was color everywhere, and the trees were so green! This was typical of all of Switzerland, but on this night, it stood out even more! Every direction I looked, I either saw colorful flowers, towering cliffs, massive waterfalls, or amazing views of the surrounding Swiss Alps.

At some point, halfway to Stechelberg, I decided to follow a small walking path between the various fields that eventually turned and followed the main river. The sunset was showing some good light in the distance. I tried grabbing some good photos of it, but nothing came out well. Or so I thought. The light had mostly gone in the distance towards the north, but as I was passing back by the church in Lauterbrunnen, I looked back to see the most vivid purple hued post-sunset glow I’ve ever seen.

Come back in a few days for the next few parts, where I explore Wengen, Grindelwald, hike the Mannlichen and take an amazing train ride to the Top of Europe station!