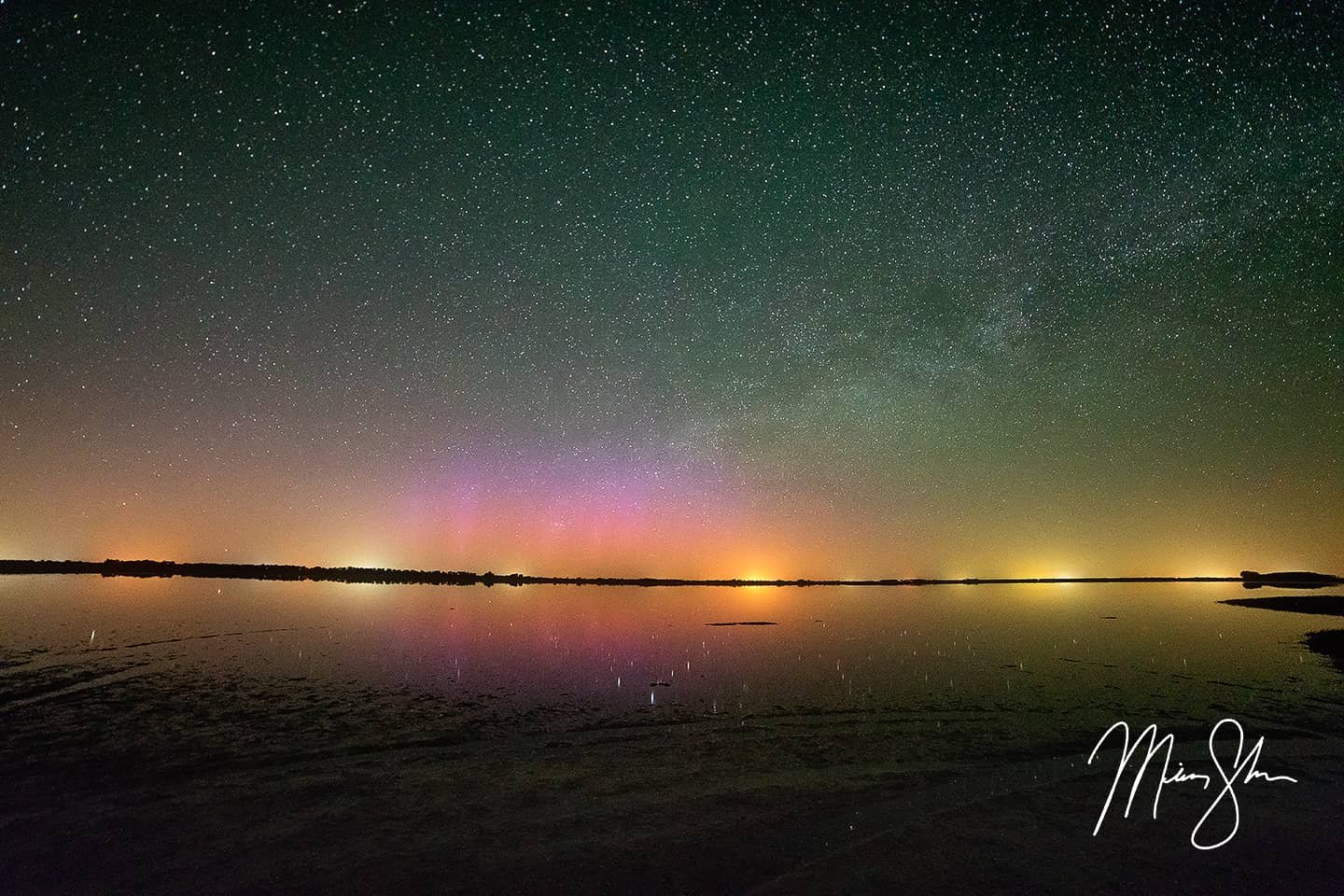 The Northern Lights In Kansas

For years, I’ve watched the various aurora services such as the Space Weather Prediction Center and Soft Serve News Aurora Forecasts, just hoping to get out and photograph even a glimpse of the Northern Lights in Kansas. The Northern Lights have been on my bucket list for years. Last night, I captured them. But the story is more interesting than just capturing a couple photos.

It all began when I left Wichita an hour and a half before sunset on Sunday night, with the intent of driving up to Quivira National Wildlife Refuge to shoot Milky Way shots and a star trail scene. I had been waiting for calm winds and a free night to get out there, in hopes of catching a reflection. I also knew there was solar activity going on through the weekend, so there was always a slight chance the Northern Lights could come out to dance in the skies above. To be honest, they were barely on my mind though. I didn’t expect much, as the prediction was that the best chance was the night before (Saturday into Sunday morning). After getting up at 3 a.m. twice on Wednesday and Friday for other photography trips in the Flint and Gypsum Hills, I drained my energy so bad that I slept like a rock Friday and Saturday nights, not bothering to even attempt to go out. In fact, I fell asleep watching the Brazil-Columbia Copa America match at 9:30 on Saturday night. I had been waiting all day to watch it! But after a good nights sleep, I was ready to go on Sunday!

I arrived on the south side of Quivira 20 minutes or so before sunset to do a little scouting. I had been here a month before and had driven by the Big Salt Marsh on the north side of the refuge at sunrise, so I knew a few locations that could work. But I wanted to scout for half an hour or so prior to see if there was an even better location. I struggled to find a good large body of water facing north for the star trails. I knew the Big Salt Marsh would still work, so I made my way up there. By the time the sun had set and light was beginning to dim, I decided to pull the camera out. Normally I set my old Canon 5D Mark II for star trails on a 14mm lens and let it shoot continuously while I go off to use my newer Sony A7rii to shoot Milky Way scenes to the south and east. But I actually sold the Mark II to my wife’s business (Valerie Shannon Photography) for her to use as a backup camera. As she had a senior portrait session last night, I went up to Quivira with just my Sony. While the Sony is a wonderful camera, I still haven’t picked up a cable release that I can set up to just shoot while I go off to do other things. So for me to shoot star trails with it, I would need to be right next to it either pressing the shutter or using the cheap wireless remote trigger. The trigger is a wonderful tool, but doesn’t let me set it up to just shoot without me pressing anything like the cable release on the old Canon.

The problem was that I was ill prepared for the insane amount of mosquitos (I have nearly 100 bites on my legs right now). To do star trails, I would need to stand outside, being eaten alive by mosquitos. So I concocted a solution. I would put the camera a little ways from the waters edge, then park the car next to it, so I could press my remote shutter every 30 seconds as needed to put together the star trails image. So I did just that.

After taking a few shots, I realized there was still quite a bit of time before the sky was going to be dark enough to really get some shots. So I decided to drive down the road a bit to another pond and see if any fireflies would come out to photograph. I jumped in the car, put it in reverse, but didn’t move. I let out an audible “Oh no…”. I was stuck. Apparently I had gotten just a little too close to the salt marsh. When standing on it at that location, it seemed fine, but the car itself weighed a lot more than I did. I tried using a plank of wood nearby to dig a little out and use as a ramp for one of the tires to back up a little. All I did was make it worse. I finally consigned myself to realizing I couldn’t get out on my own. I tried calling my wife and found that my signal wasn’t strong enough. So I got out of the car. 10 feet away, in the middle of the road (also in the swarm of mosquitos), the signal was strong enough to make a call. My wife gave me the AAA numbers to call and get some help. So I called at 10:30, and was told someone would be out by 11:15 to get me.

I waited in the car for 15 minutes, then realized I might as well make use of my time and get some good shots. The mosquitos were starting to quiet down a little, so I set up tripod up to shoot a Milky Way panorama.

My plan had been to shoot a Milky Way panorama like this from the west side of the salt marsh, facing east, but the salt marsh had dried up in the spot I had hoped to shoot it. I also didn’t know when the AAA guy was going to get there, so I just set up shop in the middle of the road and went to shooting. When I got to the last few frames of my shot, I noticed a heavy purplish/pinkish color. Seemed strange. I knew there was a slight chance of the Northern Lights making it quite a bit south, but hadn’t received any alerts that they were anywhere near as far south as Kansas. I’ve read in the past, the kp index (a measurement of the strength of the aurora borealis) needs to be at least 7 or higher to even have a chance of glimpsing the Northern Lights, even with a camera. The camera can pick them up before the human eye can. So I decided to set the camera up facing north. To my surprise, there was a pink/purple glow directly to the north.

I shot a number of images of it, and you can see the columns of purple and pink moving in the distant north. I was estatic. I took at least 10 shots because I was in disbelief that I was actually capturing the Northern Lights from Kansas finally. This had been a major bucket list item. I knew the photos wouldn’t be amazing, as the aurora was so far off in the distance, and I really only had the water to work with as a reflection foreground. Still, it was extremely exciting to see this!

My next thought was that it would be fun to get a shot of the car, stuck in the salt marsh, with the lights behind it.

It was at this point that I realized it was well after 11:15, when AAA said someone would be there to pull me out. I went back to the car to charge the phone a little (I forgot to mention, I had about 10% battery left at this point, but thankfully brought my charger). After charging, I called back at 11:45, and was told their only driver for the area was 400 miles away on a job. 400 miles?? That’s like, nearly to Denver! They suggested I give the local authorities a try. So I give that a run. Pretty soon, I’ve got a Stafford County Sheriff Deputy on his way to help me out. While waiting, I tried my hand at one more shot of the Milky Way, as the aurora was no longer showing up at this point.

Around 1 a.m. or so, the sheriff arrived. Unfortunately, he didn’t have something that could hook on to anything that could really get me out without pulling my bumper off, so he called up the tow service to help out. He had me wait in the truck with him. When I told him I photographed the Northern Lights, I’m not quite sure if he believed me or not, but it got him talking about his travels up to Montana, South Dakota and Wyoming, and how I really should get up to photograph Glacier National Park if I like that kind of scenery. I really appreciated his help. By about 2a.m., the tow service guy showed up. Within 5 minutes he had me out of the muck. Unfortunately he could only take cash, so I would have to follow him back to St. John to pay at his business. What I didn’t realize is that St. John was another 30 minutes southwest of there yet! Either way, I was just thankful to be out of the muck, and thankful he was willing to drive out and help me out in the middle of the night.

When I got to St. John, I had a notification come across my phone that the kp index had shot back up and the numbers were looking like it was possible to see the Northern Lights in Kansas again. We got to the tow truck guys place and I paid the bill and thanked him for his help. I had about an hour and 45 minutes left to get home, but decided to stop once or twice to see if the lights had come back out. Unfortunately nothing showed up (there was a very slight green glow low on the northern horizon, but I think it was likely just air glow). Just to make myself feel better, I shot the Milky Way one more time before returning to Wichita.

As I got home, I was thankful for all the help people had given me. I was also ecstatic that I finally photographed the Northern Lights from Kansas! I fell asleep that “night” to the sun coming up on the eastern horizon, knowing that I finally photographed the Northern Lights in Kansas and knocked that off my bucket list. While it may not have been during the best of scenarios, at least I’ve got an interesting story to tell!