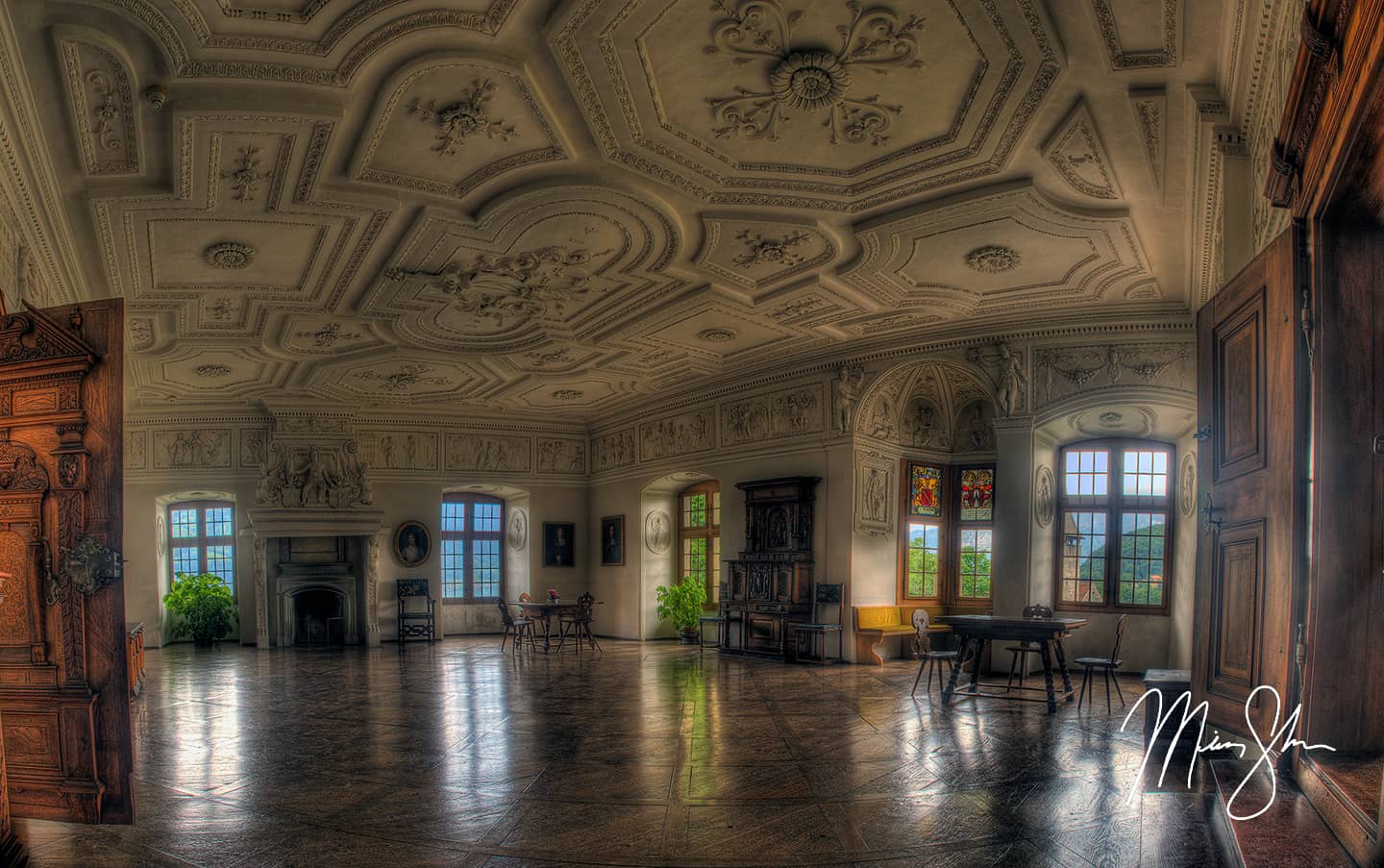 Welcome to the final part of Alpine Magic! In the last post, I went exploring Wengen during an amazing afternoon and evening, and then hiked to the top of the Mannlichen. In this final part of my 7 part Alpine Magic travel blog series, I visit Spiez and it’s wonderful castle on the beautiful Thunersee lake.

We had packed all our bags at Hotel Oberland in Lauterbrunnen where we had been staying, and jumped on the train out of Lauterbrunnen for Interlaken. Interlaken itself is a beautiful town that’s situated between the Thunersee and Lake Brienz, connected by the Aare river that flows between the two lakes. While I would have loved to have a day to explore Interlaken, all we had left was one afternoon before having to head back home to America, and we had chosen to spend it in Spiez. So we switched trains in Interlaken and sped off to Spiez.

We arrived at the train station from Interlaken and were immediately floored by how beautiful the views were across the town and lake. Spiez is a beautiful little town to get lost in. Numerous vineyards and orchards dot the surrounding hillsides and it’s main attraction is the Schloss Spiez, or Spiez Castle. And it has a gorgeous harbor, nestled against the beautiful Thunersee! We were there on a day with perfect spring weather. There were dozens of sailboats out on the lake, kids playing football (soccer) on the lawn in front of the harbor and a lot of people just enjoying a beautiful day in an amazing Swiss town!

Our first order of business was lunch. We stopped at a place near the train station called Brasserie 66. I think I had a salad of some kind, but I honestly don’t even remember. What I do remember was the amazing view from the terrace of the restaurant towards the castle and lake. (Are you seeing a theme yet? This town had amazing views!) Once we had paid, we started our walk down to the castle. Before we got very far, I turned towards the west and saw a church standing tall among other buildings as seen in the photo below.

We walked by all sorts of people enjoying the amazing weather, especially as we got close to the lake. When we found the castle entrance, we were told our admission was free because of the Swiss Pass. Yet another reason the Swiss Pass was such a great deal for us! We were excited to begin exploring this castle!

The castle of Spiez was built in 933 by Rudolph II, King of Burgundy. Early on, it was settled by Freiherr von Strättligen, and has changed ownership and been passed down by many important families in the region. It has also undergone many renovations over it’s nearly 1,100 year lifespan. It went through major construction in the 13th centuries. In the 17th and 18th centuries, the castle became a residence to the von Bubenberg and von Erlach families.

In the late 1920’s, the Spiez Castle foundation purchased the castle and did some major restoration work. This included an armory with displays of many different weapons, armor and beautiful shields in displays. You can see one of the shield displays and a wall of various swords and weapons in the photos below.

On the lower floors of the castle, lots of windows out onto the Spiez Harbor and towards the church show the beauty that surrounds this amazing castle. The first window below shows how thick the castle walls were closer to the ground floor. These walls were almost 10 feet thick, creating a great defensive barrier around the castle.

Another beautiful room in the castle featured a library in a wood-paneled bookshelf with an old ceramic stove next to it. The castle was filled with beautiful and interesting treasures like these. The Spiez castle had a number of these ceramic stoves in some of the rooms throughout. I had read that these stoves were built into the walls in ways that kept the rooms cold during harsh winters without smoke pouring out into the rooms.

The kitches of Spiez castle were set up in a way that made you visualize what life would have been like cooking centuries ago in a castle like this. Plaques were set up on the walls of the kitchen (and everywhere else in the castle) with really interesting information and facts about the room.

The most interesting room in the entire castle to me was the gorgeous banquet hall, which was built in 1614. It’s been renovated over the years with polished wooden floors, beautiful wooden doors and hand crafted antiques such as the hand-crafted wooden trunk and table and chairs. The room also has some beautifully created stained glass windows depicting various medieval themes along with various family portraits and an intricately designed ceiling. I shot multiple closed up images of this room from the corner and stitched them together in the photo below. This is one of my favorite photos I’ve ever taken.

Wooden staircases like the one below took us up into the castle tower, where thin windows out over the Thunersee and back towards the town of Spiez would have been useful for defending the castle in times of turbulence and war. The views out over the church and Thunersee were beautiful, if a bit hazy by the time we reached the top of the tower on that day.

After we had fully explored the beautiful castle, we walked back out towards the castle church. We had hoped to also look inside it, but a wedding ceremony was taking place, so it was obviously off-limits. Pity, as it looked beautiful from the outside at least! We spent some time wandering the castle grounds and ran into a statue of Adrian von Bubenberg along with an interesting fountain, both of which can be viewed below.

One of the best things about the castle was the perfectly manicured gardens and the views of the harbor to the south of the castle! The garden flowers were magnificant. I don’t know whether they are this well kept through the entire summer into the fall, but in late May, the colors of the various flowers in the garden were extremely vivid. The grass and trees around the place were as vivid green as any green I’ve ever seen. And the beautiful blue-green color of the Thunersee out across the lake and in the harbor of Spiez were also extremely colorful. We wandered around enjoying the views with the rest of the tourists. Some of the images below show just how beautiful the entire area is!

After this amazing afternoon through Spiez and it’s castle, it’s safe to say this town on the southwest shore of the Thunersee is an amazing place! I know in the previous blog that I sung the praises of Chamonix, Montreux, Lauterbrunnen and especially Wengen as some of my favorite towns in the world, but Spiez adds to that list! It was a great day watching all the people having fun out near the harbor, out on the Thunersee on their sailboats, exploring the castle, or enjoying lunch while looking out over the lake and mountains in the background.

Our Swiss adventure was coming to an end at this point. We enjoyed the train ride back to Zurich in the late afternoon and evening, making it back to Zurich just after sunset. I had booked us into rooms at a hotel called Park Inn as it was fairly cheap and near the airport. Thankfully they also had a shuttle. What I didn’t know, was that it was themed after the famous fast food restaurant McDonald’s. (when writing this article, I’ve found that they’ve removed the McDonald’s theme from the hotel between the time we stayed there in 2009 and now) It was actually pretty interesting. It was a really clean hotel, with an elaborite and funky design, as you can see in the photo below.

Our night there went good. We managed to get a good night’s sleep knowing we had a long trip home to the USA. When we got to the airport, we had an hour or so to spare and so we did a little shopping at the grocery store across from the airport. As I hadn’t really gotten any souveniers to bring back for friends and family, I dropped a good 75 swiss francs on Swiss chocolate to haul back in a checked bag. There’s not much better than Swiss chocolate to give as a souvenier from Switzerland!

As our Alpine Magic adventure in the Swiss and French Alps ended, I thought back to how amazing it was. It’s been almost 6 years since I was in Switzerland, and I’ve longed to go back ever since! While I’d love to revisit some of my favorite places there, there were a number of places I missed out on in the short time I was there that I really would like to see!