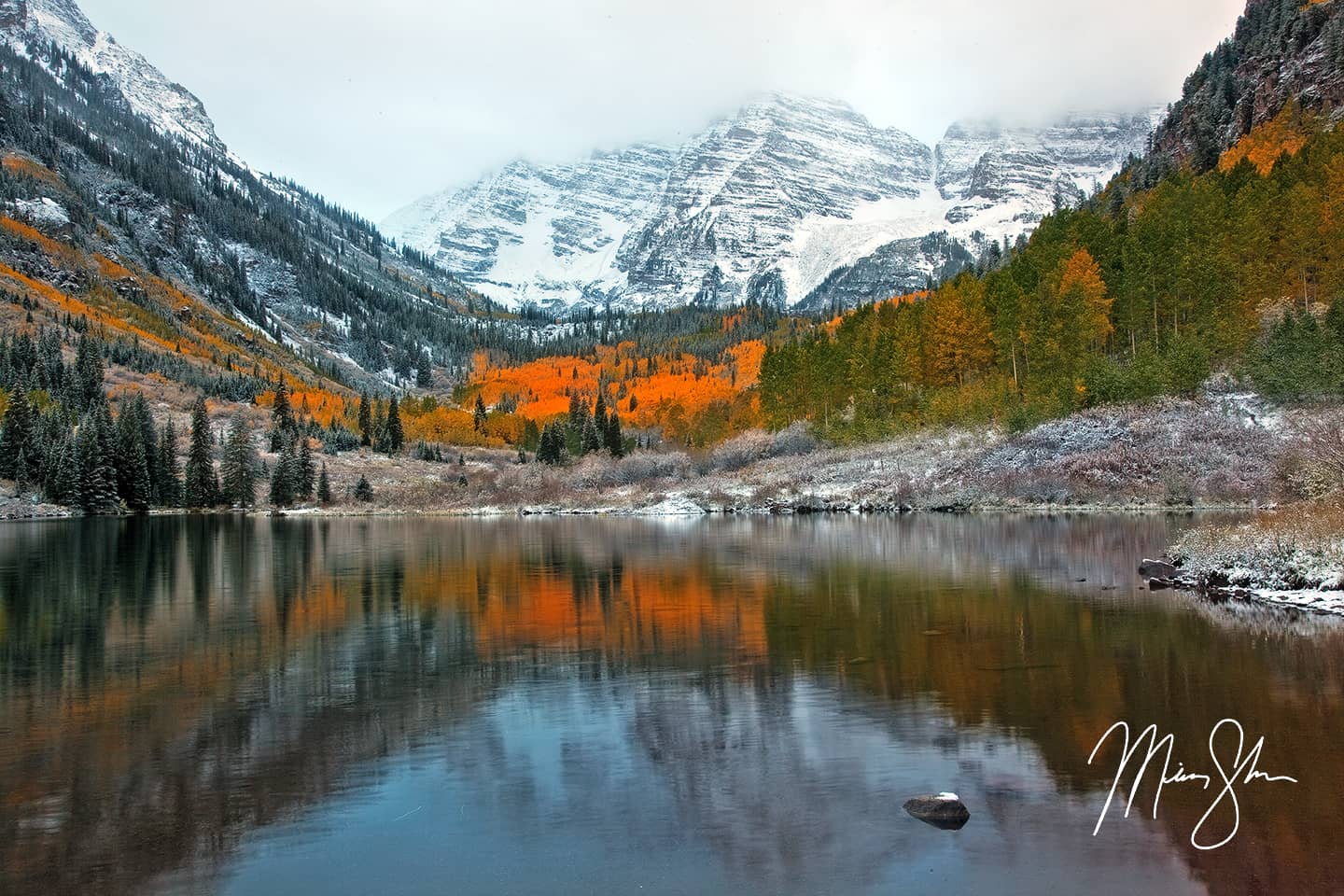 2013 was an interesting year for my photography and contrasted greatly with 2012. In 2012, I traveled more than I have ever traveled in a single year. Two massive road trips that covered a majority of the entire US and Canada west coast combined for 7,000 plus miles of stunning scenery dominated my portfolio in 2012.. For 2013, outside of a short trip to Colorado for fall colors, my entire year is made up with local Kansas shots. In one year, I went from single to married, and it was absolutely a great year! However, just because my life changed dramatically, I don’t feel as though my photography suffered. It just took a different and unique direction. I focused more on the local scene, spending a lot of time at the Keeper of the Plains and out on the open skies of the beautiful Flint Hills of Kansas! Below is a collection of 13 of my best images from 2013! 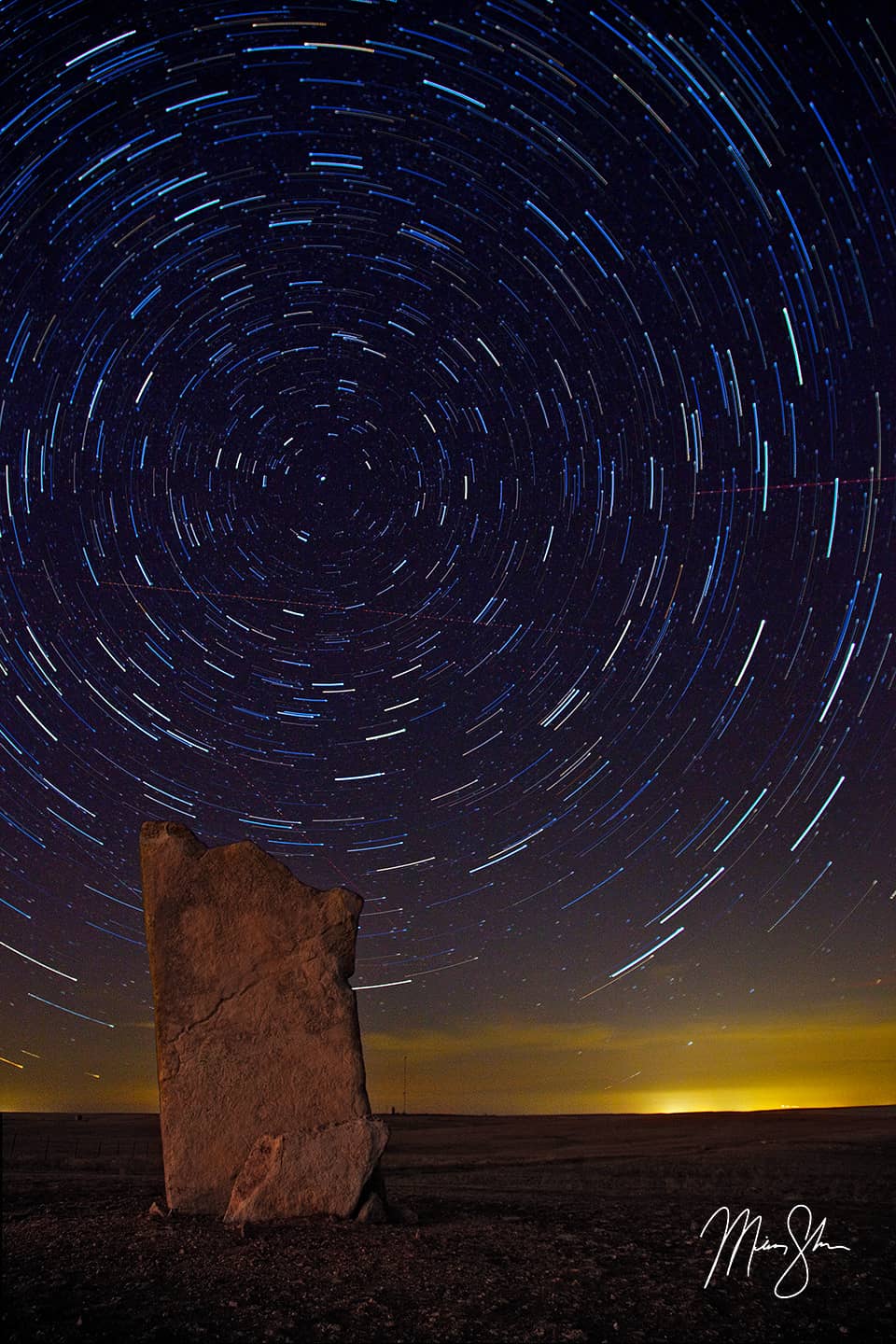 This image stands out to me mostly because I tried something a little different with my star trails. When I shot the star trails in this image, I took 30 second exposures for 30 minutes to an hour. Usually when I use this technique, I stack them into one image to create this effect. The other method is to just shoot a long bulb shot for 30 minutes or more. In this particular image I used the stacking method. However, I tried something new by increasing the exposure on the last shot. It created a sort of brighter “tail” to each star trail. I’ll be using this technique and more to try to make my night shots stand out as more unique in the coming year.

This was shot during a short trip into the Flint Hills for my now-wife’s birthday. We wanted to find this waterfall as I had heard it was one of the largest in Kansas. It was before the flooding later in the summer, but still had some good spring melt runoff going on. It stands out to me as the first Kansas waterfall in an adventure I’ve started to undertake to find them all! 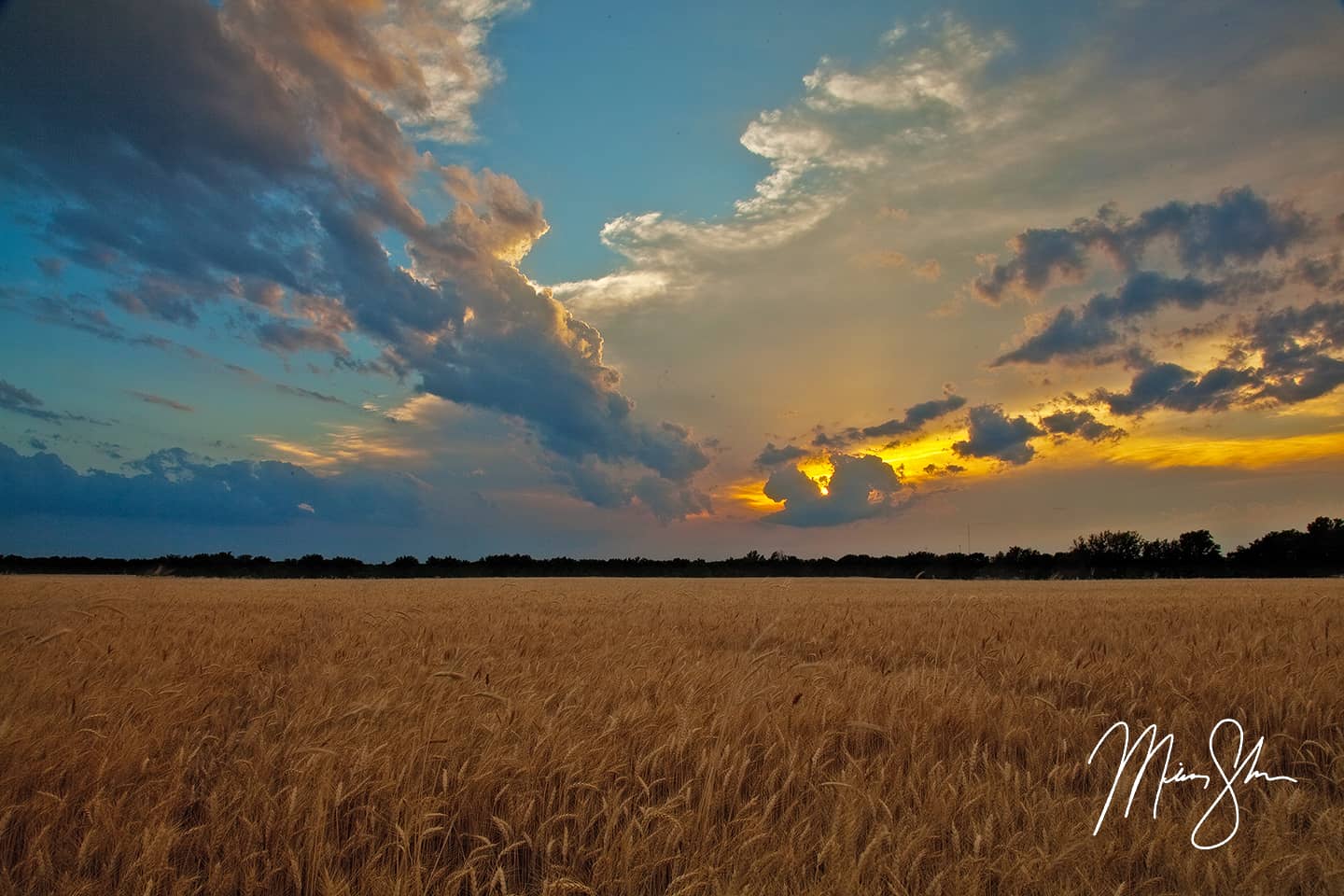 I shot this shortly before harvest near Wichita. The wheat fields swaying in the wind looked like swirls of gold against a beautiful Kansas sky. Hence the title Kansas Gold. 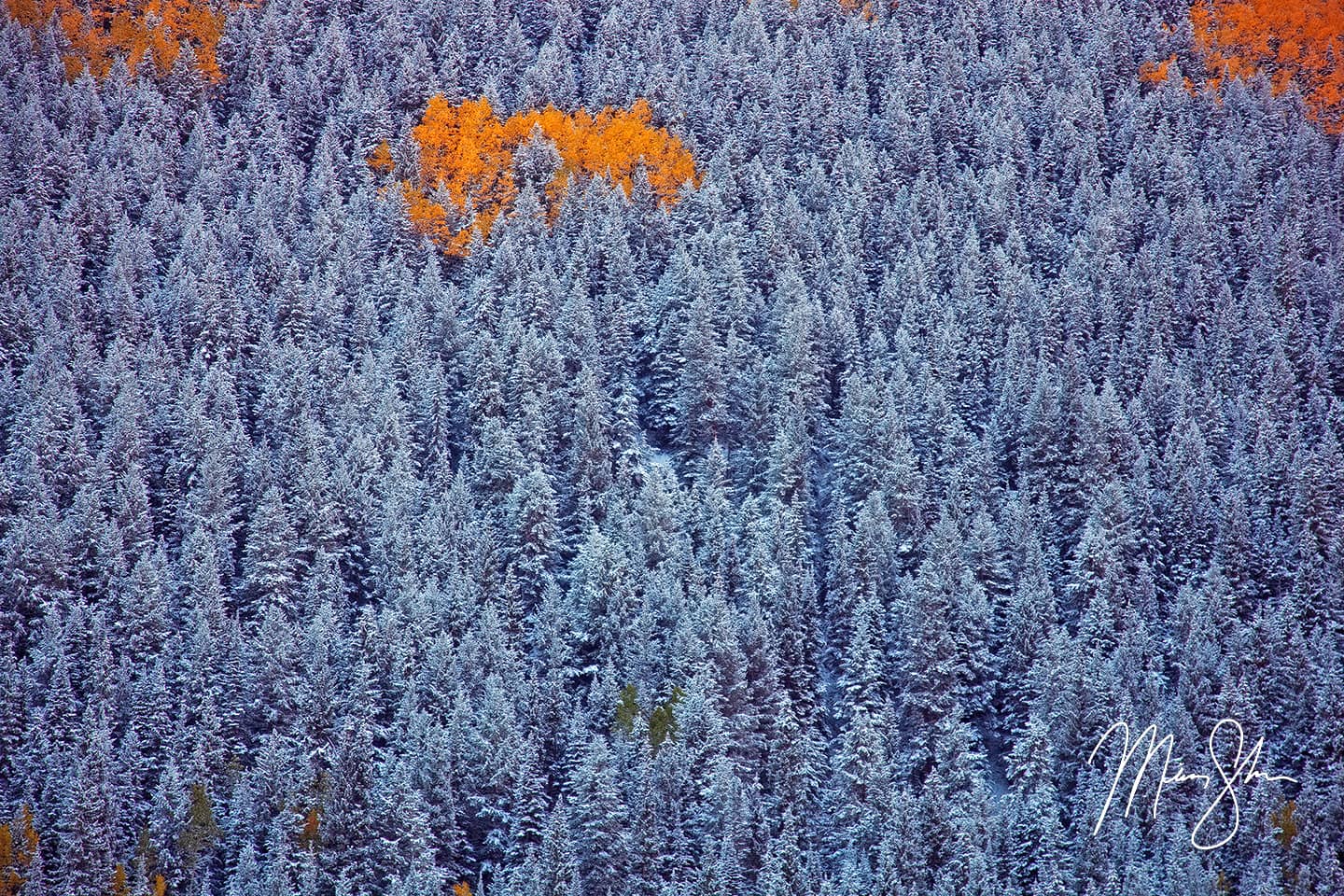 This one is a little different for me. I usually get drawn in by grand landscape scenes, but lately I’ve been trying my hand at more intimate scenes like the one here. This was one of my favorites from the September fall colors trip out to Colorado. I was really happy with the contrast between the snow covered pine’s and the few stands of aspens spread out to give it a splash of warm color.

This autumn there was a good 2-3 day period of lots of rain. I had moved to a new place on the northeast side of Wichita, and decided to check out the Chisholm Creek Park trail system to find a few good locations to shoot. I managed to find this little waterfall (shortly after dropping my lens cap in the same creek and slipping camera first into the mud). With the water pouring heavily over the falls, I shot what I feel is one of the best autumn shots I’ve managed in Kansas. 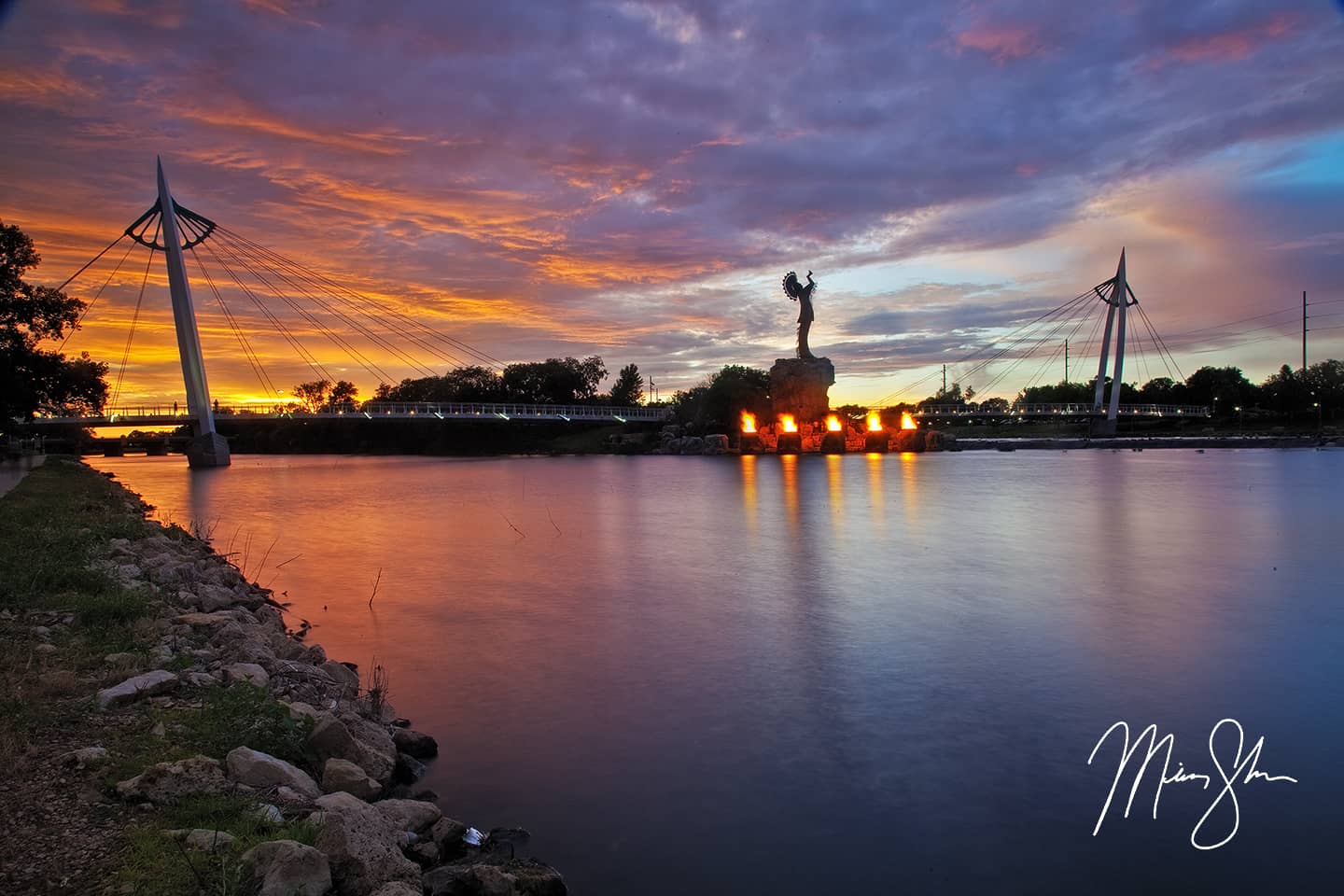 8. Summer Sunset at the Keeper of the Plains

After years of drought an a nearly empty Arkansas River in downtown Wichita, the area was graced by lots of flooding, causing the River to swell to heights not seen for a few years. It made for some more interesting shots than a foreground of grass where there should be water. I shot this when the river was at about it’s normal height, with the fire pits going and a beautiful sunset in the background. 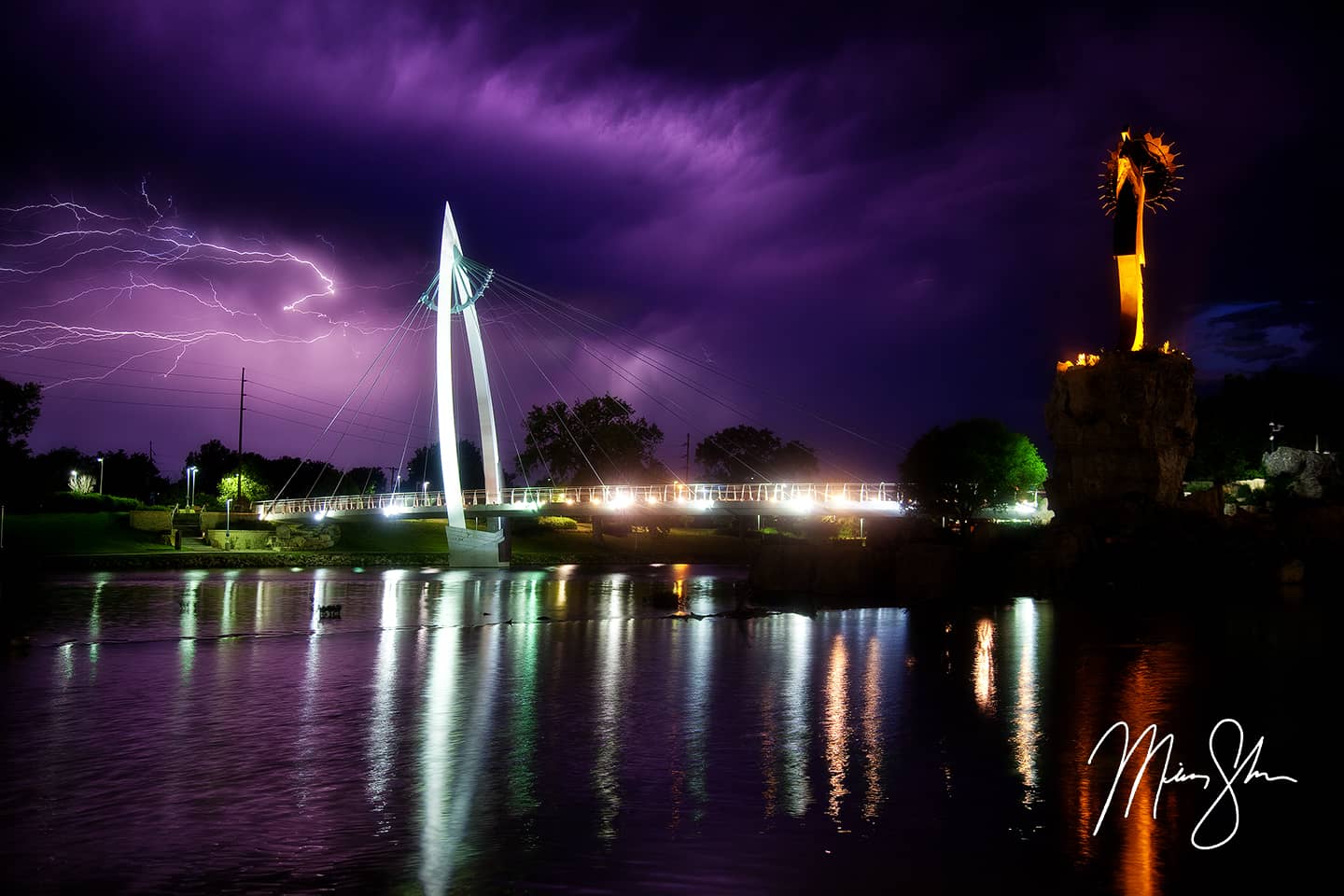 7. Keeper of the Plains Lightning

Every year, I manage to get at least one crazy lightning shot down at the Keeper of the Plains. This year was no exception, and produced the shot above. Usually the place clears out when the storms get closer, but there was a surprisingly large amount of people enjoying the light show with us. The end result is what you see above.

I took this shot back in June on a birthday day trip with my now wife. This was the best shot from that particular trip. While the waterfall wasn’t flowing heavily, it still made for a beautiful scene. It’s still probably my favorite waterfall to shoot in the state, because I always seem to get a good shot there. I’m sure I’ll be back in the spring this year, or even in the winter if a good rainstorm hits. 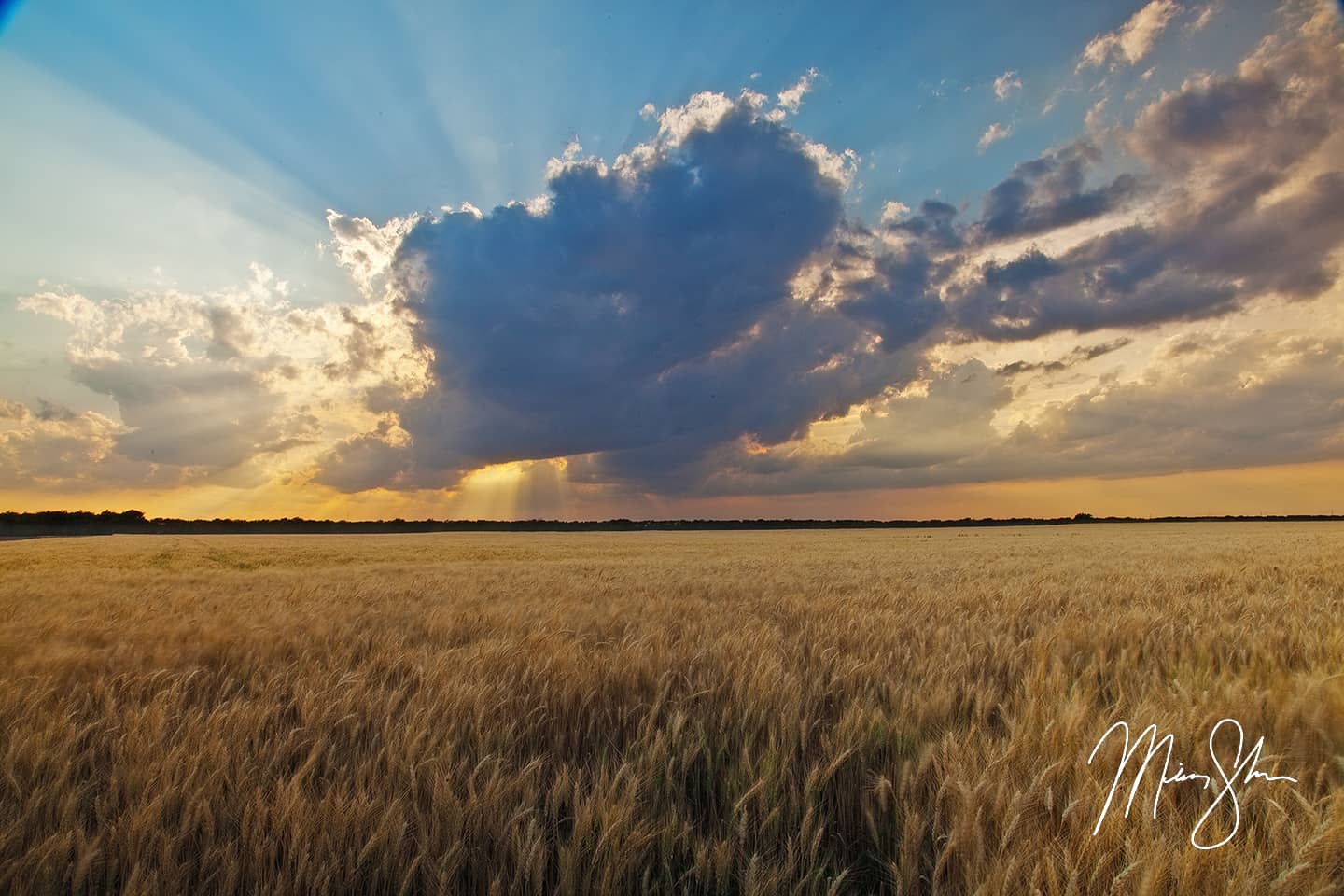 5. The Heartland of America

One complaint I’ve had for years about my Kansas galleries is the lack of wheat and sunflower fields. While I’ve yet to get a few sunflower field shots, I did manage to capture a few good shots of the beautiful wheat fields that Kansas farms are known for! The sky was brilliant the night I shot this, with beautiful cloud formations to work with and the wind rustling the amber waves of grain gave some of the images from that day a swirl of gold for the foreground. 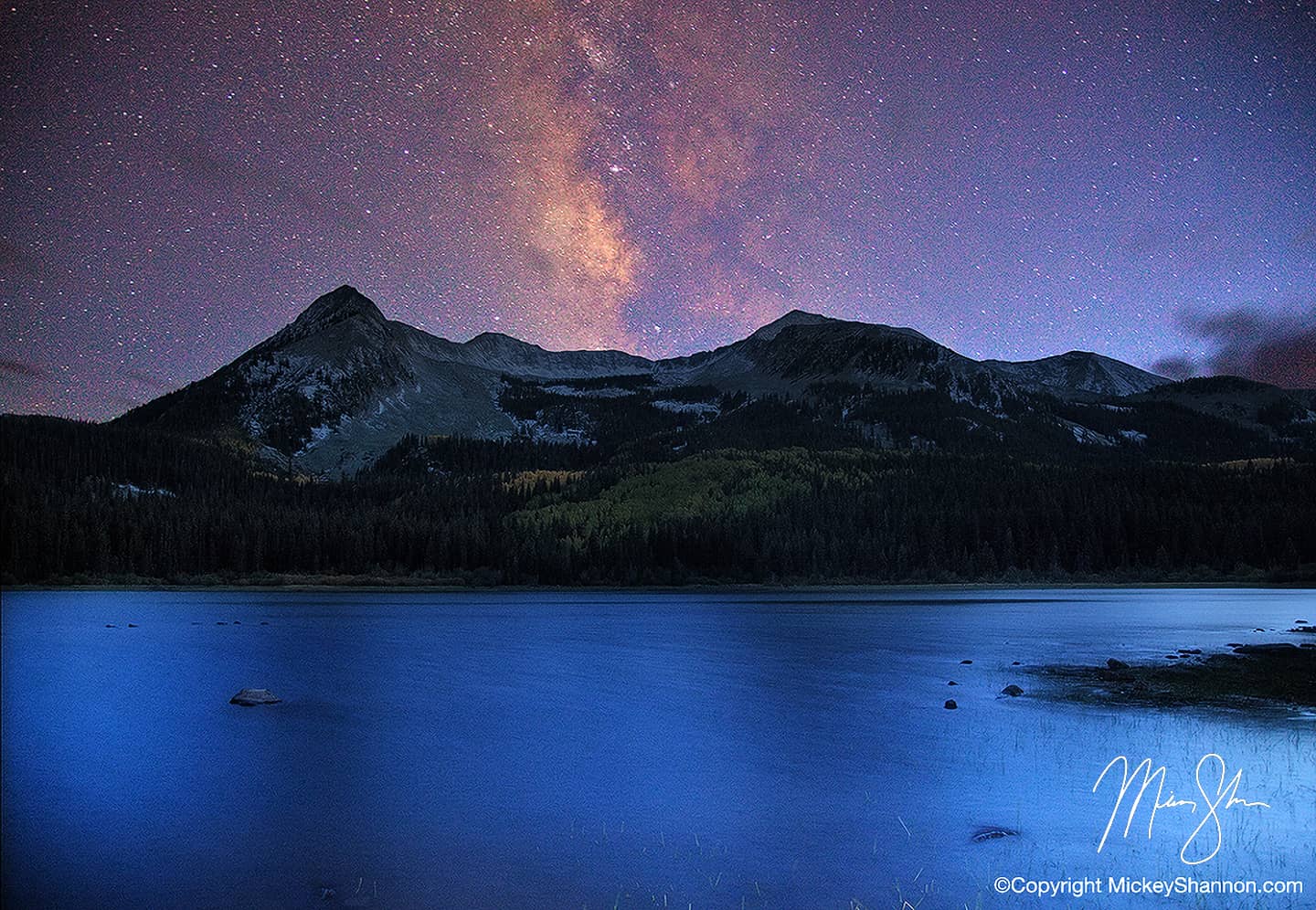 This one took a lot of time to get right. Every time I go to Colorado, I plan to take a few night shots. Whether it’s because of time constraints, weather or some other reason, I never seem to get one. This time I was bound and determined to shoot a good Milky Way shot. This particular one was fun, as it was a new place. I had heard that the Kebler Pass area west of Crested Butte was beautiful in the autumn, but didn’t realize how beautiful! Camped at Lost Lake Slough, the area is definitely one of the more remote campgrounds in the state. Beautiful aspen colors, tons of hiking trails and gorgeous scenery dominate the area. A few hours after I shot this, clouds rolled in and we woke up to a snow covered tent the next morning. But what a beautiful night of stars it was! This image was shot by complete accident. I had been trying to find time to shoot a good autumn scene at one of the many waterfalls I had found over the summer. I missed shooting with the leaves still up in the trees, but made it over to the falls at Chase State Fishing Lake as the leaves scattered the ground and pool of water below the lower waterfall. The early morning sun kept peeking out from the clouds just enough to give some interesting side light to the scene. To say I had planned this shot would be a lie, as this is one of those photos that I love but was taken by sheer luck!

2. Autumn and Winter Collide at the Maroon Bells

This photo moved up the ranks of my top photos pretty quick. The day I spent traveling around the mountains near Aspen during a brief collision of autumn and winter was pretty spectacular! Beautiful autumn colors mixed with wintery scenes to create the scene above. One of the nice things about shooting on the night this was taken was the complete lack of photographers. I’ve been there on cool autumn mornings with 200 other photographers lining the lake trying to capture the same sunrise image of the Bells. I usually become disappointed in knowing I’m getting the same shot as everyone, and walk around the lake to the creek beyond. On this evening, however, there were only two of us braving the cold for a good shot of the Bells as they would appear, disappear and reappear every few minutes from the clouds that were, at times, dropping good amounts of snow on the already beautiful scene. Shortly before I shot this scene, a moose wandered out of the woods to the north of the lake, followed by 4-5 photographers all trying to get a good shot of him. Even more comical, after I finished shooting this scene, the moose wandered back out of the trees on the other side of the lake stalking those same photographers who had gotten way too close. 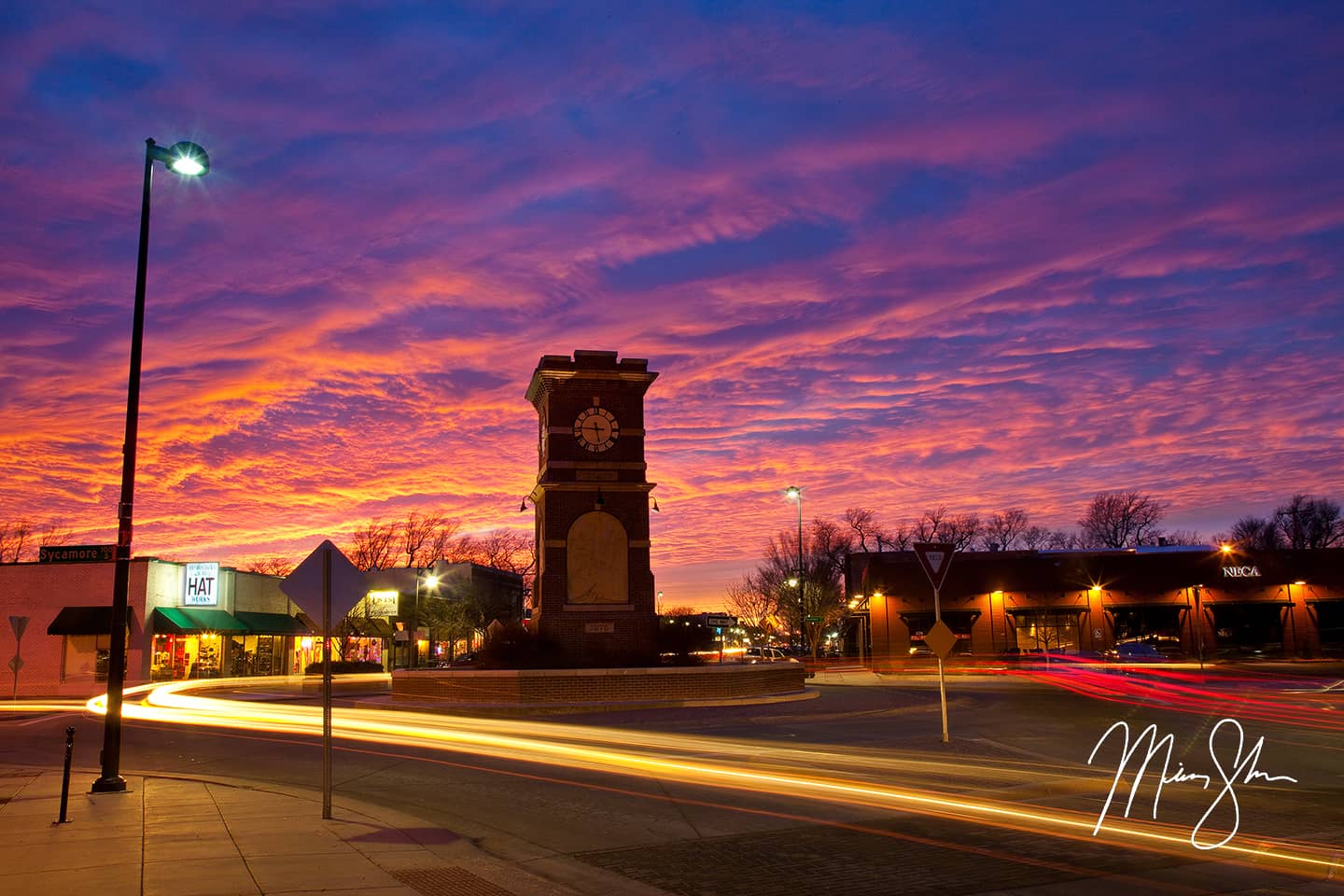 There is no way that this image wasn’t going to make first place! I could have traveled as much as I did in 2012 and probably not found a sunset as stunning as this one was back in January. This was shot on a chilly Friday evening in January only one year ago at the Delano clocktower. Besides the beauty of the sunrise, there are two things that I remember standing out to this photograph. First, the image was used as the cover of the 2013 Delano Visitors Guide, available at businesses throughout the Delano area of Wichita. Second, I remember my now-wife going nuts for this photo when I first posted it. (we had traded Facebook comments about both the sunrise and sunset that day. It was only a few shorts weeks later that I took her to a local lake to teach her star trails. This photo will always be special to me for that reason!

I also want to share one photo that I don’t have for sale, but would for sure be on this list if it was in my portfolio. Back in late July, I proposed to my then girlfriend and now wife (married for all of 12 days now!). Being a landscape photographer, I had to get the ultimate picture of my proposal. I had it all ready to go. Teter Rock was a special place for us, as we hung out for one of the first times out there on the prairie. I had taken a few night shots out there before, and knew exactly what I wanted for my proposal. A picture of the proposal with all the beautiful stars in the background. Full the full story of the proposal, just click the picture. You can read all about how I used a remote to capture the scene below. 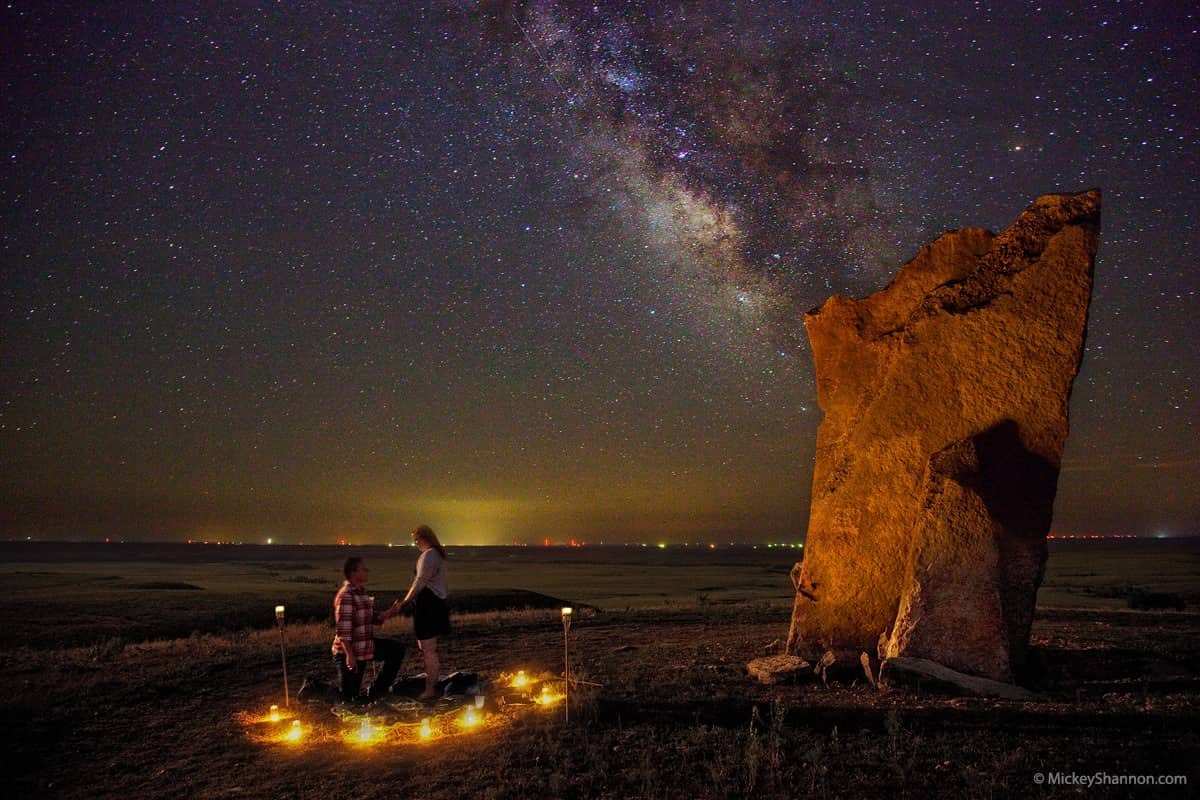 As you can see, this was a pretty active year of local photography. 2014 is already shaping up to be a great year as well! I’ve already made it to Rocky Mountain National Park in Colorado to start the year off with some winter fun! For all who have asked me for years to add some tropical ocean shots to my portfolio, it looks like this will be the year to do it! I will also have a major art show this summer at a good location here in Wichita that I will announce at some point soon! Not to mention, plans for a complete revamp of my website and blog! So keep checking back in 2014 to see what kind of amazing stuff I have in store! And feel free to comment here and on Facebook to let me know what kinds of photography you’d like to see!

Here’s a few honorable mentions:
Lined up for the Show
Chase Lake Falls of Gold
Waterfalls of Cowley State Fishing Lake
Keeper of the Clouds
Lights of Delano District
Keeper of the Fog
Blizzard of Oz
Keeper of the Plains Winter Landscape
Star Trails Over Teter Rock