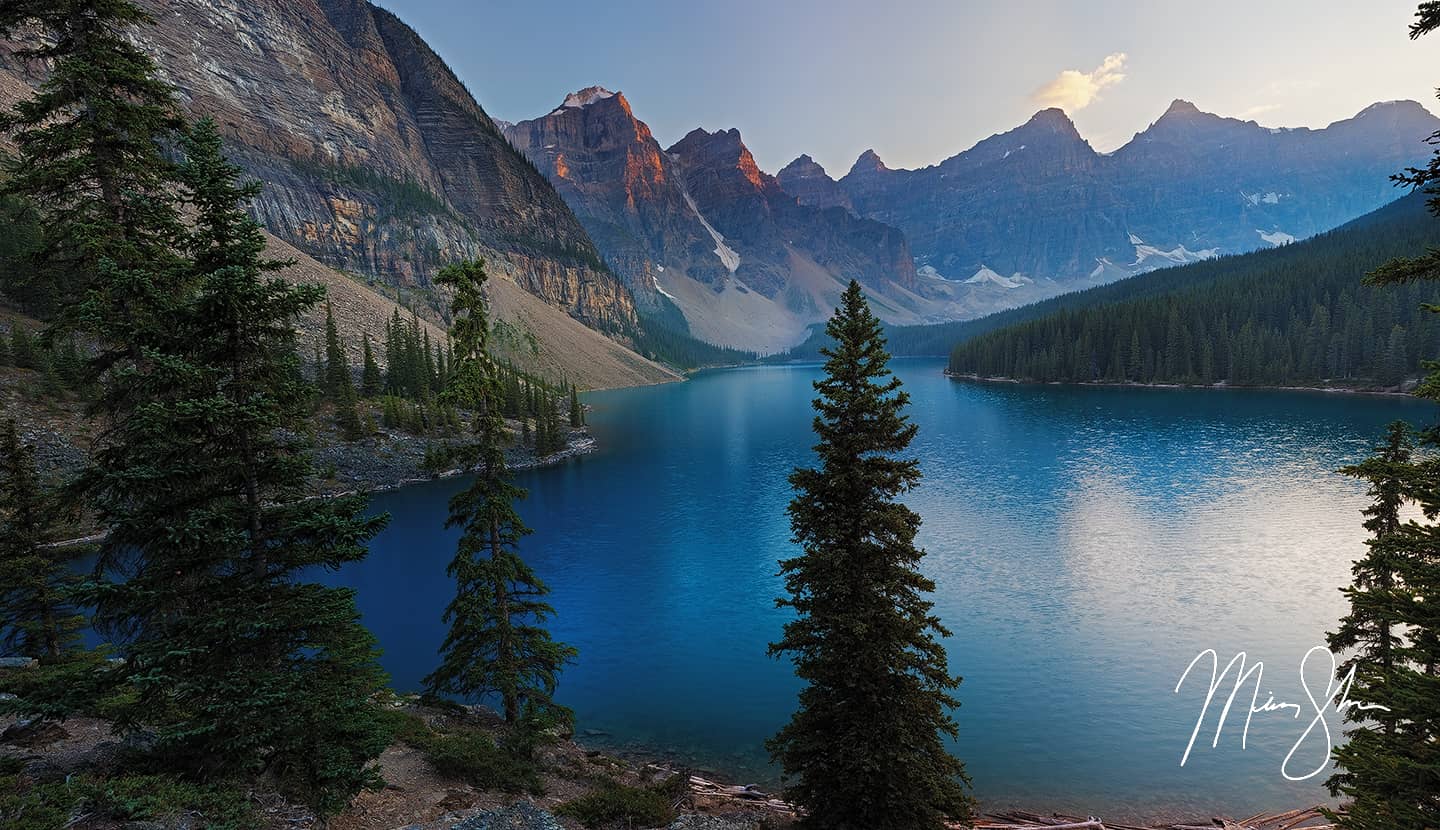 2012 was an amazing year for me! I managed to travel the American (US and Canada) West extensively in a short period of time. Two major road trips spanning a total of over 7,000 miles in under 2 weeks weilded some great adventures and my best photography yet! From the majestic Canadian Rockies to the rugged Pacific coastline, the west is truley a place to explore! After the amazing year that 2012 was for traveling, I can only hope 2013 turns out even better! With that said, I present the images below as my 12 favorite photographs of the year 2012!

1. Spectrum of a Sunrise

It’s interesting that my very first time visiting the Pacific Ocean should also end up being my best photograph of it. In late January, I took a crazy 3500 mile 5-day road trip from my home in Wichita, Kansas, passing through the Grand Canyon and Vegas on the way to the Pacific Ocean and eventually on up the coastline to San Francisco, the Redwoods and our final destination of Portland, Oregon. We hit the Pacific Ocean after dark at San Simeon on the south end of Big Sur. When I woke up the next morning, I was greeted to this magnificent sunrise! It was easily one of the most beautiful sunrises I have ever witnessed and produced a number of fine images that morning. This image was the first I took, and turned out the best!

It’s rather hard to take a bad picture at a place like Moraine Lake. For years, I dreamed of traveling to this spot to photograph the lake. There’s a reason it’s so highly regarded as one of the best mountain lakes in the world! It’s just that beautiful and easily the most stunning alpine mountain lake I’ve ever seen! The funny thing is, during the 2 days I had to photograph in this area, I never really captured the image I want. The weather never cooperated to give me a stunning sunrise or sunset. The wind never truley died down to give me that crystal clear reflection I had hoped for. Yet, I still love this image in all it’s imperfection.

When you visit Multnomah Falls in the beautiful Columbia River Gorge of Oregon, you get a sense of awe about them. Maybe it’s the local legends about how the falls were formed. Or maybe it’s just the fact that Multnomah Falls is the crown jewel of an area that’s highly regarded for it’s large concentration of waterfalls. Everywhere you turn in this area, there’s a beautiful waterfall pouring through the lush green rainforest. While spring is typically the time to go, as the waterfalls are rushing with snow melt-off from the mountains above, I visited in late January, shortly after a massive winter storm pounded the area. The wind was whipping around enough to give much of the trees and plants a nice green blur to them and the water was flowing as if spring time was in full effect making for the scene you see above.

I had a last minute chance to visit Little Rock, Arkansas back in April to play in a soccer tournament. Knowing I would be a new place, I looked up a few interesting places to visit in hopes of maybe getting a good image or two while down there. At the top of most lists was the Old Mill in North Little Rock, which was famous for being in the opening scenes of the classic Gone With The Wind. It just so happened that I visited when the flowers were in full spring bloom giving the place a very colorful look to it!

On my first visit to Teter Rock last July a massive thunderstorm rolled through the plains. There is nothing more awe-inspiring than standing at the top of a hill out on the prairie with the echoes of thunder and flashes of lightning off in the distant. Teter Rock itself was interesting enough, but throw in the crazy lightening storm that developed and it made for classic, iconic Kansas scenery. The image above is the best of the shots from that night and this location has become my favorite place to shoot out on the Kansas prairie.

Across the border from Canada’s famous Banff National Park lies Yoho National Park. Another of the Canadian Rockies beautiful national parks. One of it’s best locations is Emerald Lake. The wind cooperated nicely on this morning, leaving the lake in perfect reflective stillness. Not many tourists were out that morning either, and the lake had a calm and tranquil feeling to it.

I could not have planned my day-trip visit to the Paradise region of Mount Rainier any better! Typically wildflower season is much earlier in the summer, with many of the flowers peaking in August. This year, everything was late, and seemed to be peaking on Memorial Day weekend in early September. This was perfect for me, as I visited the Saturday before Memorial Day and was floored by how stunning the wildflowers were. While I had to share the area with more tourists than I have ever seen in my hiking days, I also got to share the trail with a very large black bear. Something I never expected to see, considering just how many people were out on the trails that weekend. This image is probably the best from that day, with some of the most vivid color, contrasted by the glaciers and clouds in the background on Rainier’s slopes.

On my massive January road-trip, there were so many places I was excited to visit. While I was interested in visiting the Redwoods, in my mind, I was most interested in the Grand Canyon, Big Sur and the Oregon coastline. As it turned out though, the Redwoods were likely my favorite part of this 3500+ mile trip. Words can’t describe the feeling of hiking silently among ancient giants shrouded in mist and fog. My only regret was that I only got to pass through the area for an hour or two before heading on into Oregon. I would have spent days exploring the region if I would have had the time.

9. The Lights of Lombard Street

While traveling up the California coastline towards Oregon, I spent a night in San Francisco, seeing a few of the major sights. One of the more interesting places I visited was Lombard Street. Lombard Street is regarded as the most crooked street in the world, and I already had in mind to do a night shot with car lights streaking down it’s curvy streets. What I didn’t expect was the 20+ other photographers there taking the same shot as me. But I still like the shot, even if it wasn’t an original idea!

My time in Olympic National Park was a little bittersweet. Olympic was one of those places I had always wanted to visit. I had always pictured foggy rainforests with constant drizzle and rain. My hope was to capture some of that in photographs. Surprisingly though, it didn’t rain a drop the entire time I was at Olympic and the sun was out the majority of the 2 days I spent traveling the park. However, I still got a few good shots of the coastline and waterfalls, this being my favorite. This waterfall is called Sol Duc Falls, with two rocks that sort of seperate the waterfall into three falls. I thought the view of the bridge from behind the falls was the best of the shots. It’s also the best of the shots I got in Olympic National Park.

San Simeon, California – August
This was shot just minutes after the other San Simeon sunrise, which was my favorite shot of the year. This one is unique from that one not just in color, but that I captured a wave crashing into a rock 20 feet or so out in the ocean. Beacause of the winter storm that had just passed through much of the west coast, the ocean was rough and violent, creating scenes like this from southern California north to Washington.

12. Peyto Lake in the Fog Panorama

Banff National Park, Alberta, Canada – August
This was one of the first shots of possibly my greatest traveling day ever. I had slept in my rental SUV at the very top of the Icefields Parkway up in Jasper National Park to get up early in the morning and shoot some night scenes of the stars above the Athabasca Glacier. The weather had other plans. What had been forecast as a clear and warm (well, relatively speaking for being high in the Canadian Rockies) night turned to a foggy and drizzly night with snow about a thousand feet higher in elevation from where I had camped out. So I traveled south down the Icefields Parkway early in the morning, eventually making my way all the way across British Columbia to the coast and Vancouver late that night. One of my first stops was to get a shot of Peyto Lake in the fog as seen above. The day before the entire area was crawling with tour buses and hundreds of tourists. Because of the overcast and fog, on this morning, I was the only car in the parking lot and had the entire area to myself. And it was such a beautiful place to spend some time admiring one of Canada’s most iconic scenes.