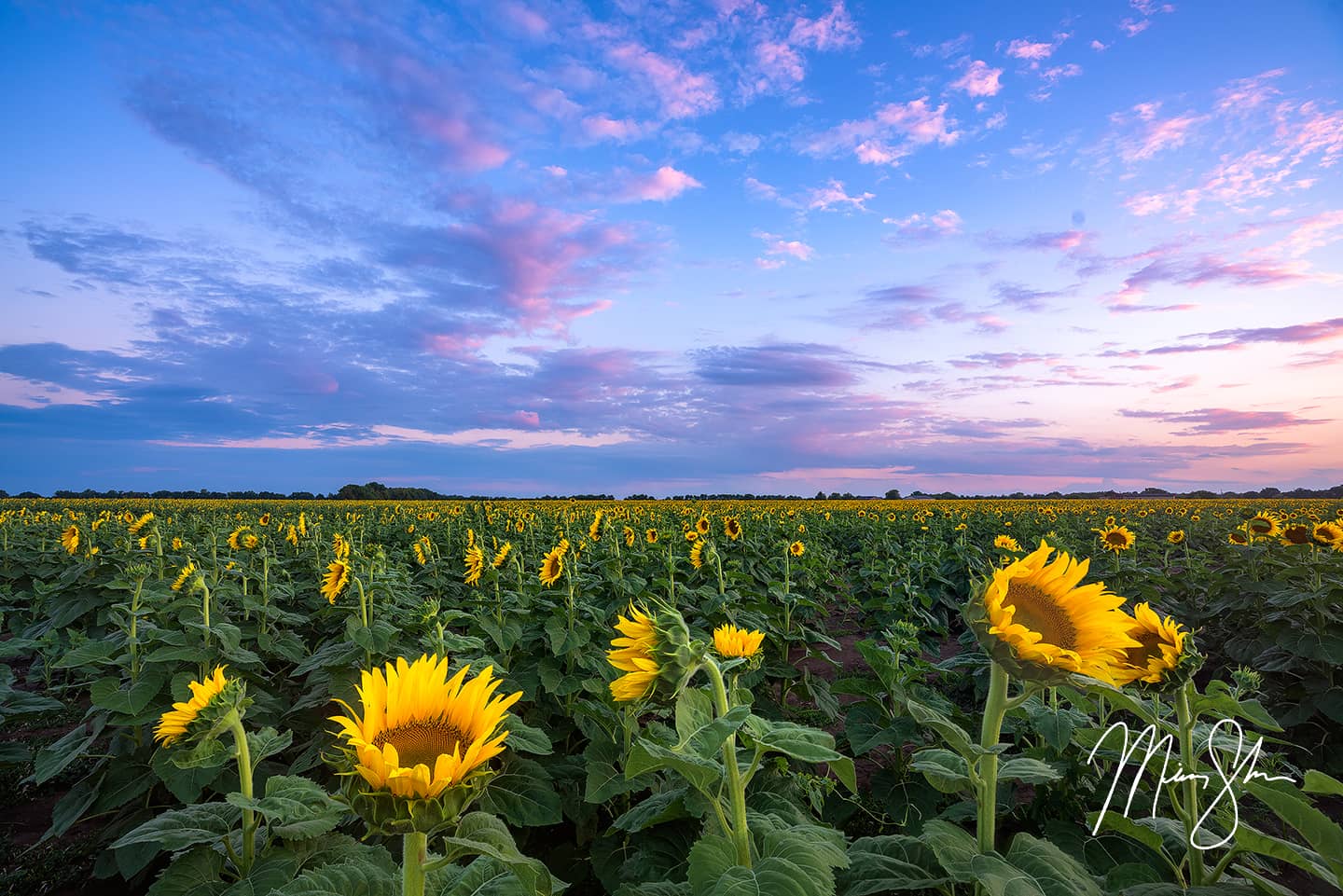 Over the years, I’ve visited dozens of sunflower fields across the state of Kansas. After all, we’re known as the Sunflower State for a reason right? However, surprisingly, depending on what part of Kansas you hail from, finding a sunflower can be somewhat difficult! That’s why I’ve come up with this handy guide to finding the best fields around Kansas. After being asked year after year when and where sunflower fields are blooming, I thought this would be the best way to help other photographers find fields and also impart a little wisdom on how best to find the fields along with ways to respect the farmers who depend on their crop. I plan to update this guide every year as sunflower season approaches with any new information. I’m also sticking to sunflower fields that are operated by farmers that actually want folks coming out to take photographs and see the sunflowers. I won’t be listing random fields that are just being grown for crops, as those sunflower farms may not want visitors potentially damaging their crops. In the cases of the Kansas sunflower farms in this list, all have actively promoted their fields on social media and many offer donation boxes for you to take a sunflower home with you.

Here in Kansas sunflowers have a short window of growth. The best month is usually August, sometimes rolling into early September. However, some years, sunflower fields will pop up as early as mid-July or as late as the end of September. My general rule of thumb (and this is very general and sometimes doesn’t always hold true) is that many of the early fields are south around Wichita. While later fields seem to pop up further north towards Kansas City, Lawrence and Manhattan or way out west near Goodland. But that’s just a general rule of thumb. I’ve even run across a field near Lindsborg on my way out to Colorado for fall colors in late September before, so it really just depends on when the farmer plants his field of sunflowers.

So with that out of the way, here is the scoop on sunflower fields in Kansas that I know of this year:

One of the first fields to pop up in 2019 was a field to the southeast of Augusta. This Kansas sunflower field is definitely turning into an annual field. I reached out and confirmed that they are estimating their field will hopefully be ready around the end of August this year!

Klausmeyer Farm and Pumpkin Patch is unique in that they usually have multiple fields each year. 2020 will be no different. These are some of the best sunflower fields in Kansas! Due to popularity and unfortunate valdalism of the donation boxes in 2019, Klausmeyer’s sunflower fields will operate a little differently in 2020. They will have two fields this year, and early indications have these fields blooming in late July or early August. Make sure to keep up with their Facebook page to get up to the minute updates on the status of each field. There will be parking, and the cost to visit the fields will be $2. You can also visit the farm for an additional fee. They also plan to have hayrides to the fields!

Walter’s Pumpkin Patch is again planning to hold the Kansas Sunflower Festival. While I don’t have dates for it, last year it was around mid-August. More updates can be found on their Facebook page.

I haven’t seen any updates from Gieringer’s on their annual sunflower festival yet, but last year, the sunflowers peaked in mid-August. Keep an eye on Gieringers Family Orchard & Berry Farm‘s Facebook page for more information!

Lyndon, Kansas | Peak: Late August to Early September
Located between Scranton and Lyndon, Kansas, Eleanor’s has confirmed they will have sunflowers again this year! Eleanor’s Events posted on their Facebook page recently that they estimate blooming to be last August or early September. The 2020 sunflower festival will be held over Labor Day weekend!

No word yet on sunflower fields in 2020 from Britt’s Garden Acres. However, they have been known for them in recent years so keep an eye on their Facebook page about the status of their sunflower field in 2020. Last year, blooming times were around late August & early September.

For the past few years, Peterson Farm Brothers have grown sunflower fields. No official word has come from their website or Facebook page yet, but the Sunflower Trails page seems to indicate it’s an annual thing and to expect sunflowers in late August or early September! Stop by their Facebook page or the The Heights – Wedding Reception Venue & Sunflower Agritourism Facebook page to keep up with the latest. While you wait for their sunflower field to bloom, you should absolutely go visit their awesome YouTube account! Here’s a video they produced about growing Kansas sunflowers:

Leavenworth, Kansas | Peak: No sunflowers in 2020

Schwinn Produce Farm in Leavenworth, Kansas has planted sunflower fields in past years. In a comment on a recent Facebook page post, it was mentioned that they did not plant any in 2020. Hopefully in 2021 they will plant again!

Without a doubt, the mother of all Kansas sunflower fields in Grinter Farms! Typically it makes it into the top ten of most lists of sunflower fields in the entire United States, like this sunflower field article from Better Homes & Gardens. It draws insane crowds every year! There are reports in years past of traffic shutting down the entire road and causing accidents! Grinter Farms has become a yearly tourist attraction around the Labor Day weekend for folks from Kansas City, Topeka, Lawrence and even from out of state. Thousands of people flock to Grinter Farms when sunflower season blooms. The best way to get updates on the condition of the sunflowers at Grinter Farms is to visit their Facebook page. General rule of thumb is to consider Labor Day peak, but in some years the sunflowers bloom earlier or later. As of June, they did make mention that current estimates have them blooming on time this year. One of the best things about Grinter Farms is the rolling hills that dot the landscape. Many of the fields around Wichita are flat, whereas Grinter Farms has a bit of curve to it! If you want to see the field without throngs of tourists, try a weekday at sunrise to beat the crowds!

Berry Hill UPick’s sunflower fields gives Topeka area residents (and those of us up for a little road trip) a chance for sunflowers! In 2019, they still had a field going strong right before I left for my annual Colorado fall colors trip in late September! This year, they have a field blooming in mid-July! They have also mentioned they estimate their second field will be ready around Labor Day weekend.